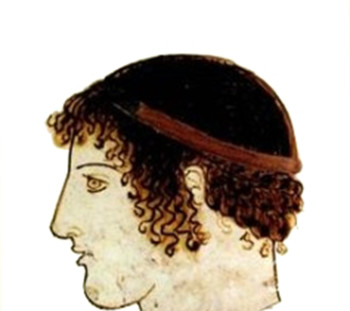 According to myth, Orpheus was the son of Kalliope, the most significant Muse, and was born in one of the caves of Olympus, close to Leivithra and Pimpleia.

He suffered a violent death by the women of Pieria, who murdered him at territory of Dion, close to Mount Olympus. Τhey afterwards wanted to wash off Orpheus’ blood in the Helicon river, which used to flow there. The river, not wanting to take part in the clearance of the murder, disappeared into the earth and appeared with clear running water at Dion, under the name of Vaphyras. From there, as a navigable river, it set stream towards the sea.

Different causes have been attributed to the Orpheus’s murder, the most probable one being the innovative rituals established by him.

Orpheus was buried at Leivithra. His tomb, a simple heroon at first, was gradually altered into a sanctuary, where he was worshipped with sacrifices, like a god.

He firstly appeared in history just before the mid-6th century BC on a relief of the archaic Sicyonians’ treasure at Delphi, where he is depicted among Argonauts with the name Orfas. At the end of the 6th century he is already renowned and from the 5th century until the end of antiquity he is often mentioned as an individual, a theologist, a diviner, a wiser and a priest.

Besides being the inventor of music and poetry, he is also known as the first philosopher inspired by God, the one who bequeathed knowledge and wisdom to humanity. In conclusion, he is mentioned as the supreme figure of Greek culture in general. 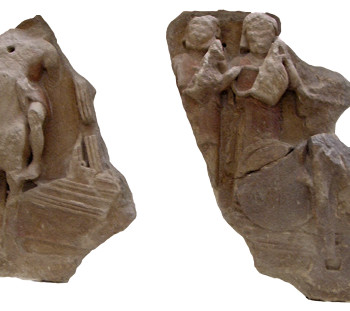 Archaic relief of the Sicyonians’ treasure at Delphi, with Argo and the Argonauts. Among them, Orpheus and Dioscuri (© Ministry of Culture and Sports) 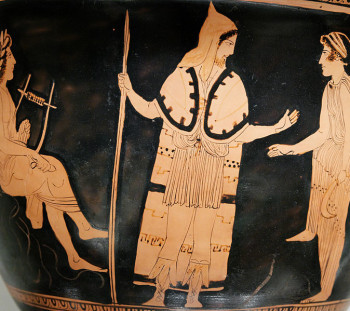 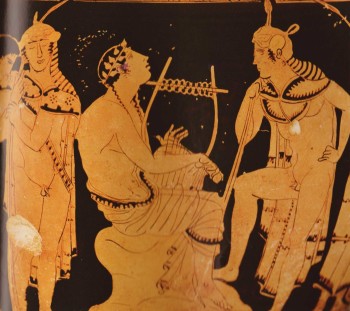 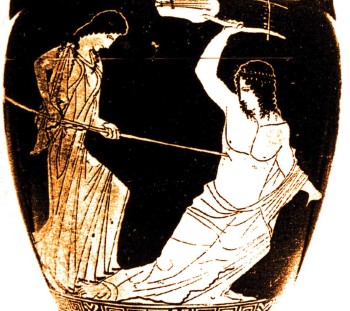 The murder of Orpheus in red-figured amphora of the 5th c. B.C. Bale 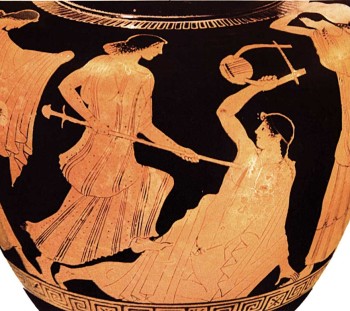 The murder of Orpheus in red-figured stamnos of the 5th c. B.C. Paris, Louvre

The Olympiades – Pierides Muses: The most important of the ancient group deities

The Muses, born by Zeus and Mnemosyne in Pieria, were a significant sisterhood of female deities. They are aligned with the Olympian Gods, but mostly with their father Zeus, who is the Father of Knowledge they represent. They ‘entertain’ their father and the gods and praise about all that has happened, is happening and is about to happen. This is the Muses’ dominant feature, which relates them with the gift of divination and highlights their dual relationship with their brother, Apollo, the god of music and divine prophecy. Their worship close to springs and the numerous ancient sources suggest that they originated from nature fairies. However, early in the first pre-Christian millennium (Homer, +- 800 B.C.) they had already become the goddesses of the divine knowledge.

The earliest and at the same time the most important knowledge that we possess on the Muses come from Homer and Hesiod.
Numerous poets and writers in antiquity have described, commented on, praised and interpreted all that they knew about the Muses and the knowledge coming from them.

According to Hesiod, the Muses are named Olympiades and were born in Pieria by Mnemosyne (Memory), the daughter of Ouranos and Gaia.
He also calls them ‘Heliconiades’ (from Helicon), as they live close to its springs in Hesiod’ s homeland, where an important Muses’ sanctuary existed. In fact, he met them himself, when they granted him the gift of Music.
The texts of Hesiod are the first to contain the term Pierides (‘from Pieria’), a name attributed to the Muses in poetry as well as in other literary sources.

The relationship between Olympian Pieria and the Muses is too intense and ancient to be ignored. It is however a fact that in Classical antiquity, the sanctuaries of the Muses were scattered across the Greek world and its colonies, as well as in Rome. Apart from the sanctuaries mentioned or possibly placed in Pieria (Leivithra, Dion, Pimpleia), the Macedonian king Archelaos established a great pan-Hellenic nine-day festival in their honor at Dion in the 5th century B.C.

According to Hesiod, the nine Muses exist as one. Plato mentions particular correlations between Terpsichore, Erato, Calliope and Ourania, while Thaleia and Melpomene were linked to Comedy and Tragedy, after these arts had been established. It is however certain that the distinct avocations of the Muses were quite diverse until they and their characteristic symbols were established in the Roman period.
The names of the Muses allude to their features, which indicates their early association with their arts. 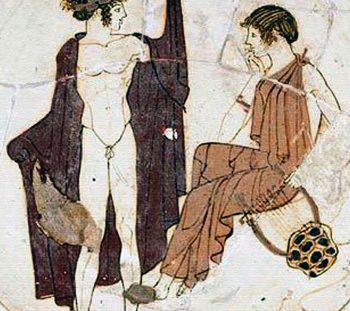 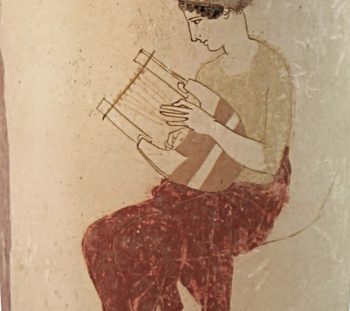 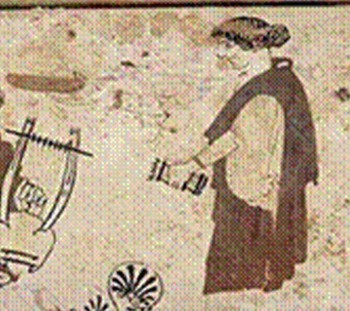 Muses and a shepherd, probably Hesiod, at the moment he receives the gift of music on Helicon (full view). Pyxis, 460-450 B.C. Boston, Museum of Fine Arts 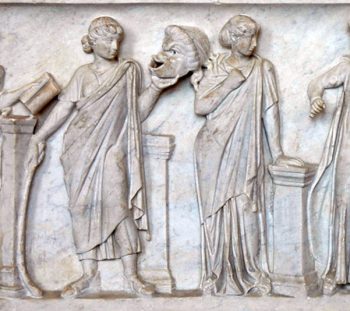 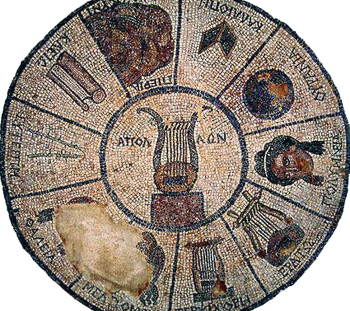 Late Hellenistic mosaic from Elis with the symbols of the Muses, Apollo and Mnemosyne. Archaeological Museum of Elis (© Ministry of Culture and Sports) 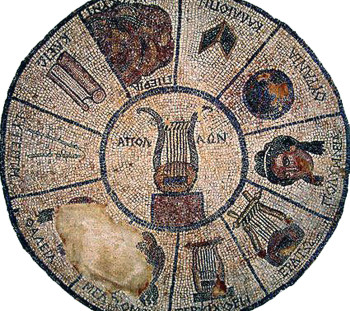 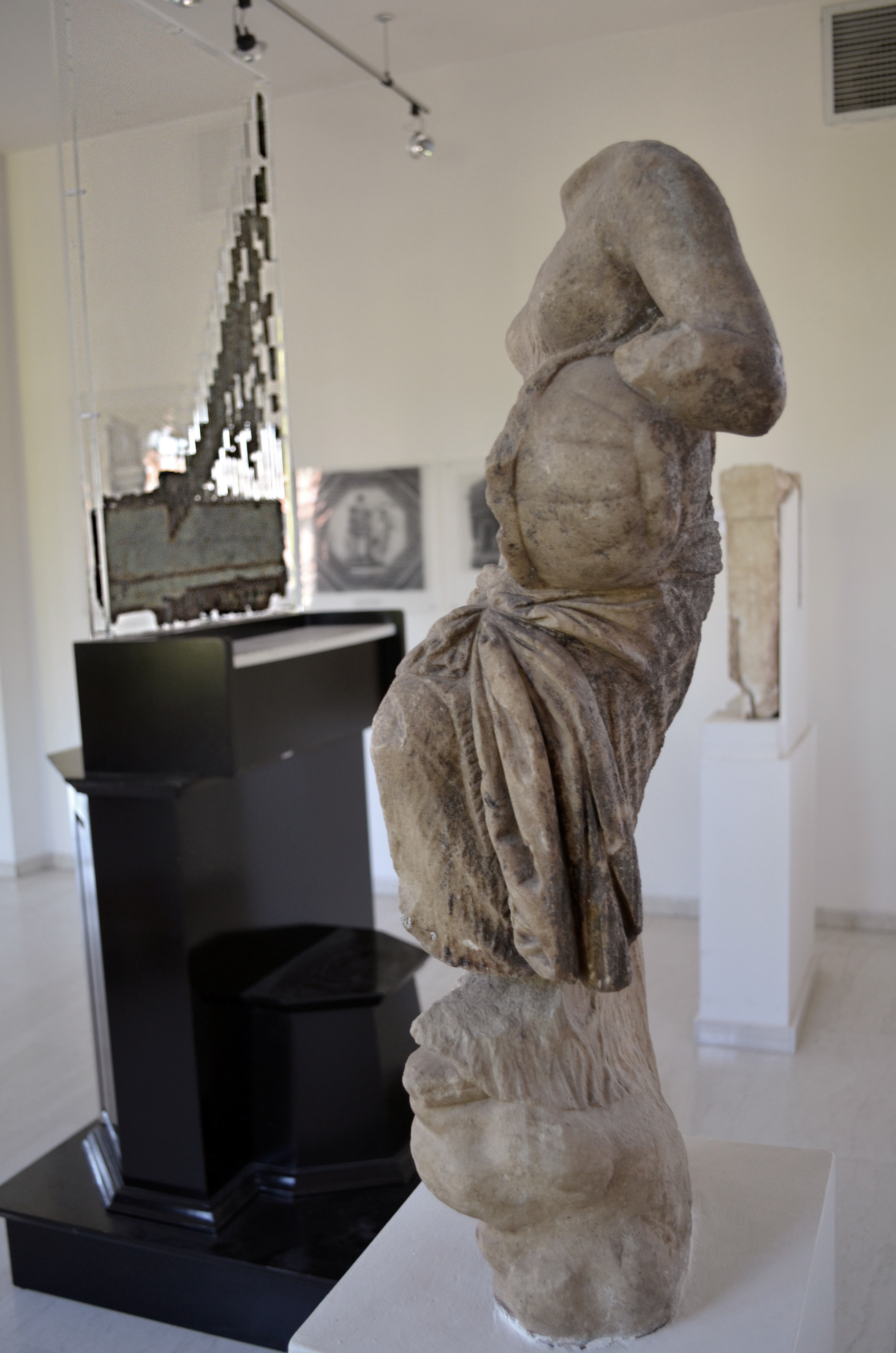 She is the leading Muse, the most important of the Sisterhood. The Muse of heroic epic poetry, she is also the patron of philosophy and of all sciences, the ‘political’ and the ‘royal’. She is represented with a chest containing papyri, a book / board, a quill, a laurel wreath and a lyre.

She is the Muse of History, including epic poetry, rhetoric, praise, divination and ‘sense of honor’. She is represented holding a book / board, a papyrus, a chest with papyri and a cithara.

She is the Muse of sacred hymns and mime art, including geometry, agriculture, history, the lyre, the ‘quest for knowledge’ and the ‘memory of the soul’. She is usually depicted to be serious, meditating, with no symbols.

She is the Muse of astrology / astronomy, as well as of epic poetry. She is represented holding the celestial sphere and a diabetes.

She is a melodious Muse, like Erato and Terpsichore. She is mentioned as the patron of rhetoric, as well as the chorus in tragedy. Her symbol is the double flute.

She is the Muse of dance, lyrical poetry, the cithara, the lyre and chanting. She is symbolized with the lyre and the cymbals.

The theatrical Muses of ‘drama’: Melpomene and Thaleia

She is the Muse of Tragedy. Her symbols are the mask of tragedy, the cothurnus, the sword and the vine wreath.

Like, Melpomene, Thaleia is a theatrical Muse, the one of Comedy. She is also mentioned as the patron of agriculture, pastoral poetry, the ‘social’ and ‘symposiastic’ element. Her symbols are the mask of comedy, the rod and the ivy wreath.