“How is it possible not to admit that we have today access to all goods offered by peace, thanks to the globalization that instituted the splendor of Rome? …”

“-the only technique cultivated is love for money. In the older days, when the limits of the nation were identical to those of the state, people had their mind in its right place … So, the gifts of life and accomplishments were abundant. But the newer generations were crippled by globalization and by the complexity of the goods it offers … Since the only adornment of power became money … true values were destroyed … and servility became the only way to prosper … Because even the worthy prefer to grow other people’s defects instead of their own gifts … Pleasure lives, but life itself has died.
But today we will delve into other issues, which remain unremarked by them …
And no better beginning could be made than the vine».

Thanks to its clear perspective and its vivid and long tradition, antiquity knew that the numerous kinds of vine were created by the wild vine, used even for medicinal reasons and for its valuable wood. According to Pausanias, there were people who had not learned to cultivate the land and they survived thanks to the wild vine.

Numerous varieties come from America and many others from Asia. But one vine created the vine culture of history: vitis vinifera sylvestris, the only one coming from Europe and NW Asia. Its European history began in Greece and evolved into great Art and mysterious religion. There is no doubt that ancient man, who had lived with the wild vine in his natural environment, had used it much more earlier than he cultivated it. The transformation of a wild vine into a hermaphrodite vine and the successive cloning of the new plant led to the creation of the cultivated vine (vitis vinifera vinifera) and to modern viticulture. We still do not know how, when and where this great change appeared and if it happened in one or more habitats. It is a fact that a laborious tree cultivation would have made its first steps.

The cultivated vine can be traced in the archaeobotanical samples of the Middle East since the 4th millennium B.C. and more often since the 3rd. After the 4th, at the Bronze Age, viticulture and vinification became a more common practice in the viniferous zone of the East and they were transplanted in the culture of Egypt, possibly from the Syro-Palainstinan coasts. According to archaeological and archaeo-botanological finds, viticulture and vinification were largely developed and specialized ever since in the East and in Egypt, probably for the upper classes, while the malt beer was created for the poor.

Depiction of vine and wine from ancient Egypt

Almost at the same time, the procedure began in our homeland, which is an ideal habitat for viticulture. The land supervising the Aegean from the north, the prehistoric “Thrace”, is one of the most earlier, possibly the most ancient of all vine cultivation zones in Greece, still remaining a wine producing region to this day. Detail of coin with vine from Maronia, a famous winemaking region of antiquity (© Ministry of Culture and Sports)

Grape pips, discovered in the excavations of eastern Macedonia, denote the ancient viticulture activity in the area that is directly linked to the Dionysian myth (Dionysus’s “Thracian” descent, myth of Lycurgus, of Orpheus, etc). Greek antiquity achieved the largest and most qualitative production of the vineyard, which were to become a permanent cultivation and a precious possession.
Dionysus was the god of wine and the main feature of his cult was its broad popular base and ecstasy, the orgiastic open-air ceremonies of mainly female groups. Few were catechized in the renowned Dionysian mysteries, where he was considered to be the first in order. If the juice of wild grapevines had ever been forgotten in a vessel, it would have been turned into a new beverage, which Classical antiquity would later name Dionysian wine. Food-gatherers (men or maybe women?) would have contributed to the birth of a new, great ‘good demon’, Dionysus…

Son of Zeus (god of heaven, rain and fertility) and of an earth divinity, Semele, or Persephone, or Demeter, Dionysus was not merely the god of the vine in theory. In antiquity, it was believed that he was the first who had taught the art of viticulture, vinification and wine drinking to mankind. During historic times, the god’s cult was extremely widespread throughout the Greek world and especially in northern Greece. Detail of a black figured amphora. Dionysus with drinking horn and vine between Hermes and Ariadne, who is holding their sons Stafylos and Oenopion (530-520 B.C.). London, British Museum The Derveni Krater, with main scene the sacred wedding of Dionysus and Ariadne surrounded by maenads (330-320 B.C.). Thesssaloniki, Archaelogical Museum (© Ministry of Culture and Sports)

Silver coin from Mendi, Chalkidike (© Ministry of Culture and Sports)

Much later, not only the vine and the wine but also other Dionysian symbols passed smoothly in the rising new religion, Christianity. Dionysus’ gifts, viticulture and vinification, mainly survived thanks to Christian monasteries, which preserved vineyards, wine installations, winery traditions and recorded archives. 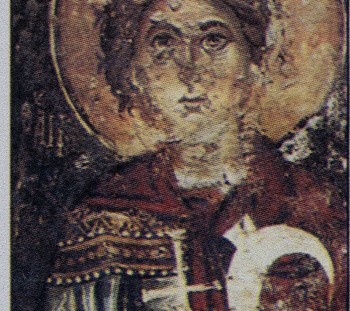 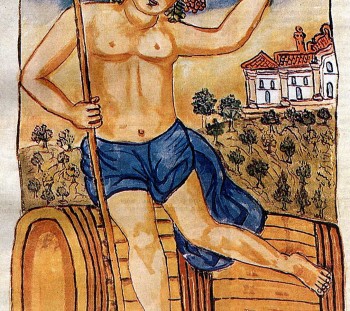 Thanks to its clear vision and long tradition, Greek antiquity knew that the future of the viticulture mainly depended on the culturist’s prediction, dexterity and devotion. He had to study all parameters and predict all consequences, in order to minimize the disadvantages and enhance the advantages of vineyard, mainly through the varieties of wine producing vines. From the Neolithic period to the 5th century, numerous varieties of vines for edible or wine making grapes had been created either with natural or human procedure. Theophrastos mentions that in the 4th c. B.C. the vine varieties were as many as vine cultivation areas.
Grape – harvest, the final stage of viticulture, was undertaken by men, women and children from the end of August to November, depending on the climate of each region, usually during Arktouros (about mid September).

After harvesting, grapes were pressed by foot in wooden or stone wine-presses, or often in baskets, initially in open-air at the vineyard and later in roofed constructions. The must was gathered in a vat or a basin lower than the pressing surface and was transferred to the pitheon, where it was poured into pithoi for the fermentation process. Dimensions and capacity of ancient wine pithoi are often impressive even to this day. The quality of the pithos was important, depending on the initial choice of clay, the shape and the size of the jar. In some cases, oversized pithoi were built by hand directly in the spot where they would be placed, even before the building construction. It is also mentioned that smaller pithoi were suitable for making better wine. In order to protect wine from the atmosphere and detrimental movement, most pithoi were buried in the ground. The more weak wine was fermented in completely buried pithoi, while for the most vigorous wine should the pithoi be unburied or left in the open air. This treatment drew similarities from the flame and the human body: the flame, if strong, grows stronger in the air, but if is weak it extinguishes. The exercised body becomes stronger by training in the open air, but the unexercised body gets sick.

Wine pithoi were opened every 36 days (more often if the weather was hot) for aeration, foam removal, general control and wine testing. The definitive opening of the pithoi was at “Pithoigia”, the first day feast of the Anthesteria, a festival in honor of Dionysus. Red figured stamnos with a ritual scene by Maenads in front of a wooden statue of Dionysos (second half of 5th century B.C.) Naples, Museo Archeologico Nazionale 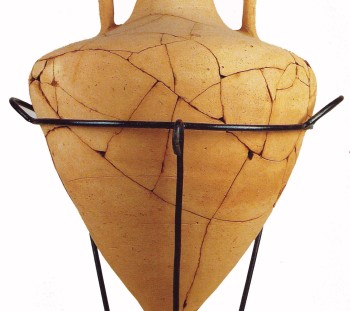 Amphora in the type of Mendi from the ceramic workshop of Krania at the foothills of Platamon Castle, where the ancient Herakleion is located. End of 5th century B.C. 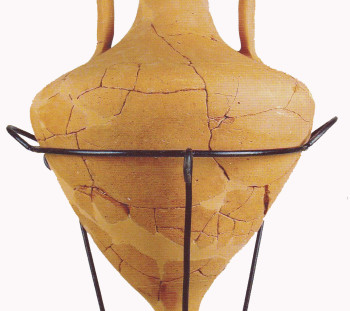 Amphora in the type of Mendi from the ceramic workshop of Krania at the foothills of Platamon Castle, where the ancient Herakleion is located. 4th century B.C.

Stamped handles of amphoras from Krania at the foothills of Platamon Castle, where the ancient Herakleion is located